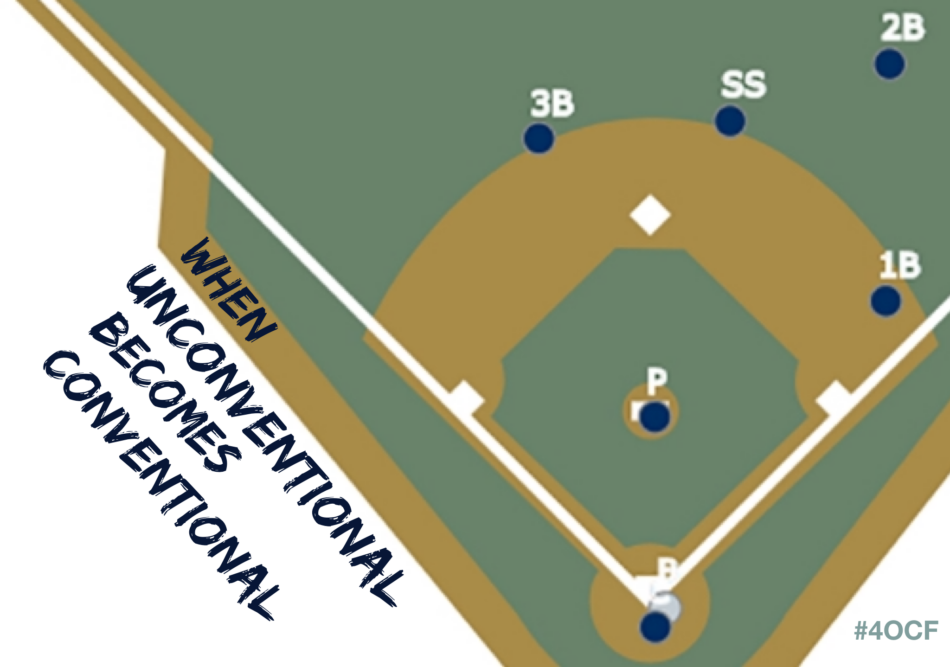 I’m reading the book Big Data Baseball, about the 2013 Pittsburgh Pirates and how they used the influx of data and specific information to change their fortune as a franchise. They looked beyond conventional wisdom and traditional baseball numbers to stop a streak of twenty straight losing seasons.

One of the newest strategies that they utilized was introducing defensive shifts to position defensive players exactly where opposing players typically hit the ball based on detailed statistics about balls in play. While not a lot of teams were doing this in the early 2000s, the Pirates knew they needed every advantage they could get compared to more financially viable teams.

It is interesting that the conventional wisdom for more than a hundred years was to play the nine position players in very defined spots. While the Pirates implemented this change for the 2013 season, just eight years later, the conventional wisdom has completely reversed and all major league teams employ defensive shifts to improve their chances against certain hitters.

As I watch the baseball playoffs this month, I recognize that the conventional wisdom has completely changed. Once one team is successful by trying something different, other teams are willing to shift their thinking, and soon the unconventional becomes conventional. Defensive shifts happen multiple times a game, and it is a regular part of the game now, much to the chagrin of traditionalists.

The parallels to our school systems are clear. Conventional wisdom has existed for many years, and we need to seek new ideas that could become the new conventional. More importantly though, we need to try those new ideas, implement, experiment, refine, and spread what’s working. We need to be willing to let the unconventional become conventional. Sharing ideas with other educators works the same as in baseball. When we recognize something that’s working, we should all adopt it.

If it’s unconventional at the time, we need to be willing to adopt early.

Go out and learn about the new ideas that are improving our schools. Share what’s working in your classroom or school. Be willing to try something that is unconventional.

The unconventional becomes conventional when we are all willing to recognize that improvement often comes at the expense of what we’ve always done.