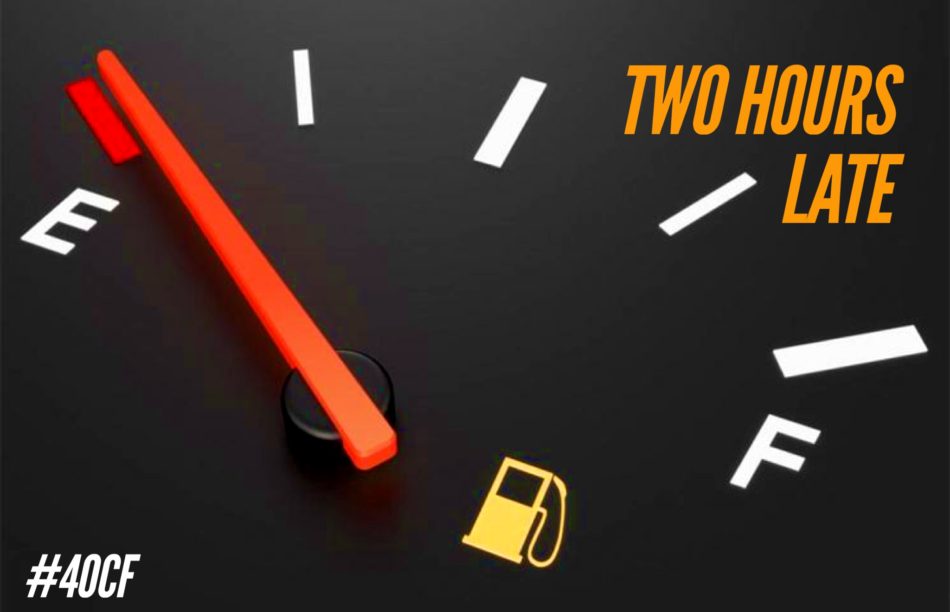 I once showed up two hours late for a job interview.

I had woken up early, gotten ready, then left early for the interview which was about 75 minutes from my house. I had planned on being there 20 minutes early.

During my drive, there was a right turn that should have occurred. It didn’t.

By the time I recognized where I was, I was still about an hour away, with the interview scheduled to begin in 40 minutes.

I called the office to let them know of my plight. They told me it was OK, and not to rush.

As I found my way to a road I recognized, I glanced down and noticed the orange light  on, indicating that I was nearly out of gas.

I again called the office to let them know I was extremely lost, extremely late, and extremely frustrated with my car, but I did not let them in on my actual frustration.

As I pulled into a gas station, I called my wife. I relayed the events of the morning, and how I was going to be two hours late. I told her I was going to just turn around and drive home. I had taken the day off from work, and could easily salvage the afternoon if I just went back home. I was going to quit.

She said she didn’t think it was a good idea. “Just go,” she said.

I relented and finally arrived around 11:00am for my 9:00am interview.

As I entered the office, I apologized and was told that someone would be with me shortly. I waited about a half hour, as the interviewers rearranged their lunch and schedule to accommodate me.

When I was finally called into the conference room, I knew that it must be out of pity, and that I didn’t have a shot at actually landing the job.

At that point, I didn’t even care anyway. But I didn’t let on. I walked into that interview with nothing to lose. I spoke from the heart, and ignored some of my canned responses. I gave everything that I had during the interview, and walked out of there feeling relieved. At least the interview was over, and it was a learning experience.

I was shocked the next day when I received a call inviting me back for a second interview. I went to that interview with a renewed confidence. I found my way to the district office without any issues. I arrived early.

I again spoke from the heart. I showed them why I was the best candidate. I left feeling confident about my prospects. I knew I had a good shot at the position, but decided that I would not be upset if I didn’t get it. I knew that I had left everything on the table.

If it wasn’t me, then I would eventually find something that was a better fit.

Later that afternoon, the phone rang. I was offered the position, my first administrative position. I was happy, but again felt more relieved than anything.

After I was officially board approved and hired, I asked one of the interviewers what he thought of me being two hours late.

He told me that he was shocked that I was so calm and collected when I walked in. I thanked him for the 30 minutes that I had to sit once I finally arrived. It had helped to calm my nerves before I walked in the door.

I still laugh anytime I tell anyone about the time I was two hours late for an interview, and still hired.

Don’t ever take anything for granted.

Don’t ever count yourself out.

Even when all appears lost, you still need to show up.