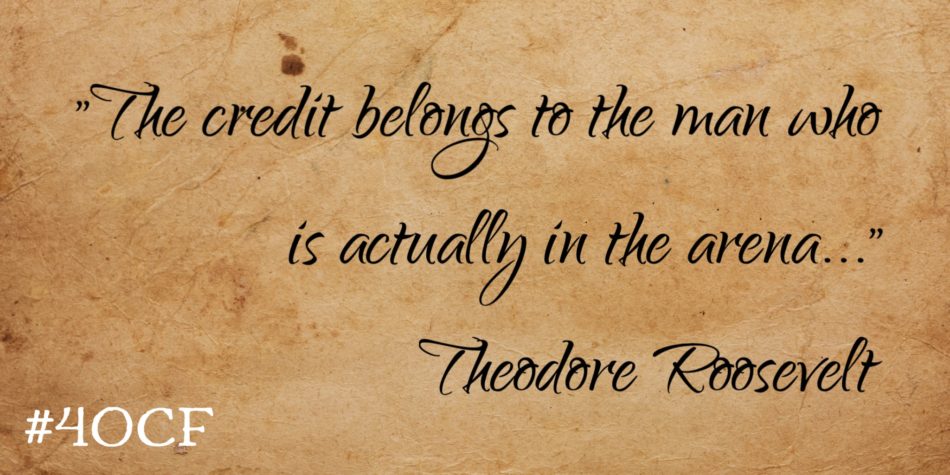 On a recent episode of his My Bad podcast, Jon Harper interviewed Dave Burgess and asked him to reflect on what he has learned from mistakes.

Dave Burgess passionately recalled a visit to his classroom by an outside observer who dared to ask the question, “What does this have to do with history?” In telling the story, Dave quoted Theodore Roosevelt who said:

“It is not the critic who counts; not the man who points out how the strong man stumbles, or where the doer of deeds could have done them better. The credit belongs to the man who is actually in the arena, whose face is marred by dust and sweat and blood; who strives valiantly; who errs, who comes short again and again, because there is no effort without error and shortcoming; but who does actually strive to do the deeds; who knows great enthusiasms, the great devotions; who spends himself in a worthy cause; who at the best knows in the end the triumph of high achievement, and who at the worst, if he fails, at least fails while daring greatly, so that his place shall never be with those cold and timid souls who neither know victory nor defeat.”

Prior to listening to the podcast, I had never heard this quote. I was struck by how much Dave’s story and the quote speaks to an inherent problem with our current evaluation system for teachers. As I prepared this week to observe several teachers, I always try to explain to them that the 40 minute observation that I conduct will capture neither what happens prior to the observation, nor what will happen after I leave. It is important to note that the snapshot of their classroom does not establish who they are as an educator.

I will continue to try to make observations about growth and improvement, recognizing that good instruction and learning happens every day and not just when I am in the classroom. In turn, I will ask teachers to continue to put forth effort each day, to strive and err, and to reflect and learn from those errors.

After all, the credit belongs to the educator in the classroom each day.

Thanks to @JonHarper70bd and @burgessdave, as well as Theodore Roosevelt for the inspiration!