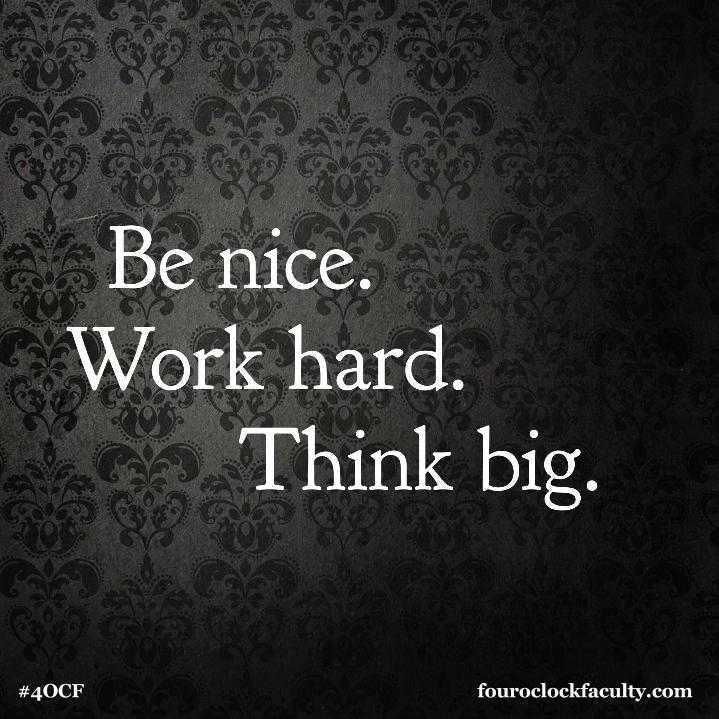 Each day I start off with these six simple words. Before my children leave for school every day, I repeat the message to each of them.

The message has come to describe the mission that I try to live on a daily basis. I also want my kids to internalize the words. The message has its origin in a book that I read when I had my own 5th grade classroom. This was the first time that I read There are No Shortcuts. The book had a great impact on how I structured my classroom, and led me to refocus my energies into helping students to become more well-rounded individuals, focusing on the social and emotional well-being of my students, as well as helping them to meet high academic standards. After reading the book, I started the next school year with large letters on my wall: Be Nice. Work Hard.

Over time, the words became the overriding mission of our classroom. The simplicity of the saying helped students to be successful in our classroom. Students knew that no matter what they were working on in the classroom, they would always focus on kindness and hard work. If they were able to remember and practice these two things, they would find great success. As our year progressed, we realized our saying was missing something. While kindness and hard work can take you very far, in order to be successful academically, students needed to be encouraged to take risks to think critically and solve problems. This was the moment we added two more words to the saying. Students brainstormed ideas during a class meeting and settled on the six simple words.

In subsequent years, I started off our first day of school, explaining the meaning behind the six simple words. They served as the backbone of our class, and everything that we did was grounded in the words. Our weekly class meeting served as an opportunity to assess our progress. Were we staying true to the words each week? Sometimes, we had to adjust our behavior toward each other, and realize that maybe, we hadn’t worked as hard as we could. During the class meetings, we often modeled what it meant to be nice to each other. Sometimes, we had to remind ourselves of the meaning of the six simple words.

As I moved from the classroom, I took the words with me. They still provide a personal mission for me. I have now tried to convey the meaning behind the words to my own children. As they grow older, they have started to understand the meaning. My hope is that they will eventually follow the six simple words closely.

References:
There Are No Shortcuts. Rafe Esquith.