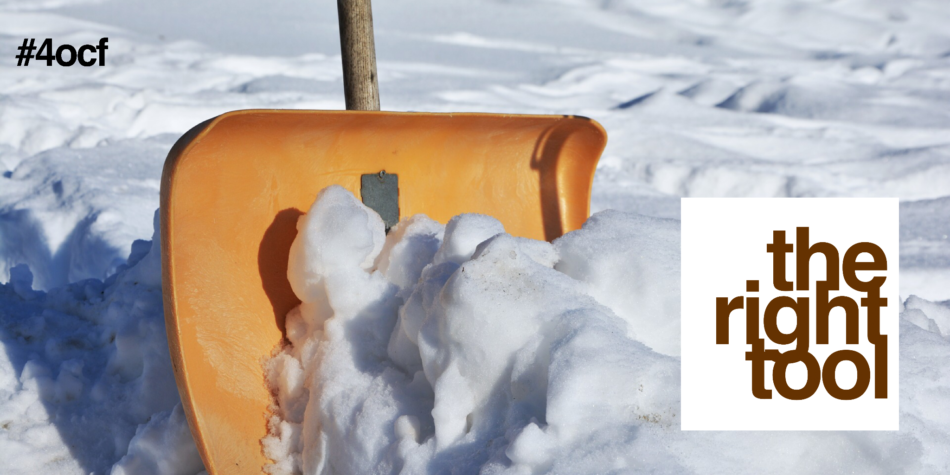 On the first day of spring, much of the northeast started getting blasted with it’s fourth Nor’Easter in two weeks.

As I dealt with the very real prospect of our school being open for students and teachers well into the last week of June, I looked outside and realized that as the snow fell, I would need to begin to remove snow from my sidewalks and driveway. The problem though was that we were mid-storm, and the storm was not supposed to end until 4am (with a predicted windfall of 10-12 inches).

I decided to brave the storm and use the snowblower to clear the sidewalks and driveway. By the time I finished, there was another half inch on the ground, replacing the snow I had just removed.

I returned the following morning to remove the two inches that fell overnight. I stood in the garage staring at the snowblower, and the shovel just behind it, and asked myself a question:

What I was debating was the effort with which I would need to remove a couple of inches from the driveway and sidewalk with just a shovel. Most of the heavy lifting had been done the previous night with the snowblower, so I opted for the shovel.

After another forty-five minutes, all of the snow was removed. I realized at that moment, that the shovel had been the right tool for the right job. The snow was not too heavy, and there wasn’t that much of it. I was easily able to push the snow from one side of the driveway to the other.

I want to help educators apply this same thinking to our classrooms. There is always a right tool for the right job. In many cases, we are using the wrong tool for a job. Sometimes, technology is not the best way to accomplish something. Sometimes, a pencil on paper works best. Sometimes, a desktop computer is best. Sometimes a tablet or Chromebook is best suited to the task.

Just as I did with my shovel, start by considering what you are trying to accomplish. Realize that there are multiple tools for every job. Realize that a pencil can be a better tool than a computer, depending on the task.

Start with your purpose, and remember to choose the right tool.