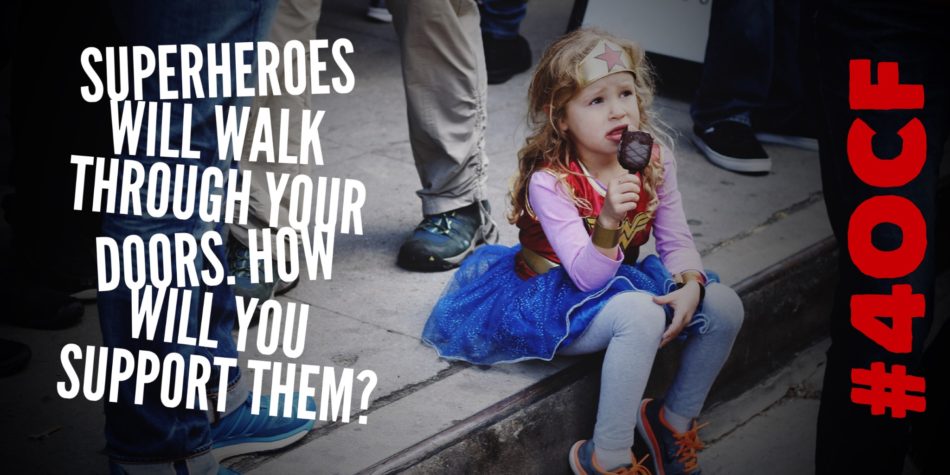 Pop Chart released an updated version of superpowers and superheroes, boasting over 200 superpowers for a diverse group of 600 comic book characters. They even took the time to break down the books into skill sets, such as powers of the body, animal powers, mastery, force control and object manipulation to name a few.

Going into a new year, how will you use your superpowers to support the uniqueness of the superheroes walking through your doors, from day one. Will you save the day by getting your superhero merchandise to display your support? More importantly, how will you break down the superpowers before you to create a superhero from within?

Invisibility Power: Many kiddos possess the power of invisibility. So shy, they blend in with the environment. While this remains a defense mechanism that they have come to love and rely heavily on, it can become a problem with social relationships and school relationships, most kids overcome this naturally but a little help to make school more pleasant will surely maximize this superpower. Past practice – quiet kid gets left alone, she’s no trouble, yay, one less kid to worry about. This year – join powers. Assign roles during collaboration, role play, and promote group/partner work with thoughtful pairings.

SideKick Power: At your side all day long – This superhero wants your attention. Tattling, class reporter, reporting all the dirty details you don’t need to hear but are going to hear anyway. This superhero is going to give you the downlow whether you want it or not, plan for it. Future journalist in the making. Throw a notepad his way and have him document a list of things he thinks are vital to the preservation of happiness in the classroom. A good reporter never names his sources…wink, wink! As he heads out for the day, he can leave the notebook with you and you will of course peruse it and discuss any concerning things at your morning meeting.

Hulk Power – this superhero has angry outbursts when you least expect it. Most outbursts have been in the making for some time. Remember, anger is normal, it is how it is handled that we want to channel with care. There is always a reason for it. Help identify it, help it to be expressed properly. Using our Hulk Powers against another’s Hulk Powers only creates a war.

Avenger Power – we all have that superhero that bullies – find their Avenger Power within. How can this superhero use her energy to save the planet instead of wreak havoc upon it? Maybe volunteer at lunch to help other kids. Read to a classmate or younger schoolmate. Help another teacher before school to get a project done. Anything that helps this superhero feel valued might promote positive interactions with others, instead of only negative feedback.

How will you channel the superpowers that come your way this year? Think about it. Plan for it. Use your superpowers for good not evil.

One thought on “Supporting Our Superheroes”